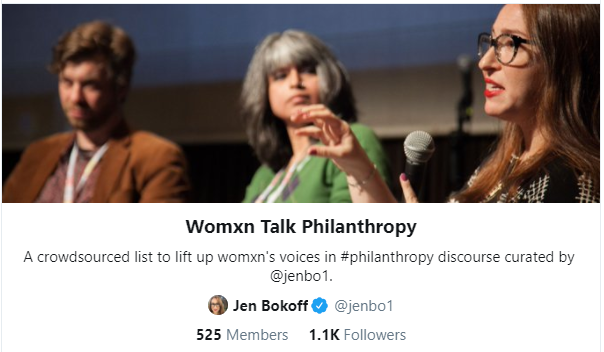 I had a Twitter exchange with Dave Campbell that sparked a crowdsource idea, that turned into something that went quasi-viral in the philanthropy Twitter world. After the large response, I made a twitter list and did some writing about why. It’s been pretty visible. Spend 5 minutes reading through those Twitter threads, but in summary, the crowdsource was for womxn thought leaders in philanthropy, and the resulting list is an all-inclusive list of the people suggested.

Note: It’s just raw data right now pulled directly from Twitter in tedious-but-useful data entry. There’s a lot more to come on this. I want to keep adding the list and evolving it into a more organized list that can directly help conference organizers, journalists, and recruiters bring womxn’s voices into mainstream philanthropy discourse. Stay tuned for additional updates, and read the article I published in the Chronicle of Philanthropy expanding on this work.